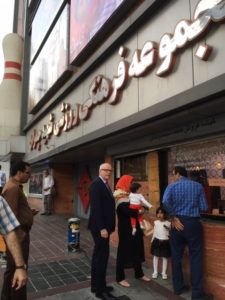 The Embassy of Finland in Teheran and the Finnish Film Foundation organize a Finnish film week in Iran from 27.9. –4.10. Finnish films are shown in Tehran, Mashhad and Isfahan, which are the three largest cities of Iran. The films presented are modern Finnish films, classics and short films.

The Finnish Film Foundation organizes similar film weeks worldwide every year.  Collaborative partners are mainly embassies and cultural institutes. However, this is the first time a similar Finnish film week is held in Iran.

Keijo Norvanto, the Finnish ambassador in Tehran, believes that Iranians will highly enjoy Finnish cinema. According to Norvanto, the Iranian audience is quite demanding, but he assures they enjoy the same things Finns do: a good story and successful cinematic expression.

“Artistically ambitious films are highly acclaimed in Iran. I think that Iranians might enjoy something new, something that differs from the usual way of storytelling. For many, cinema is quite literally a window into the world,” said Norvanto.

A wide selection of films

The Finnish Film Foundation and its Iranian collaboration partner Art & Experience Cinema picked the films for the film week. According to Norvanto, the selection emphasis was to get a wide range of films which represent the best Finnish cinema of the past years.

Out of Aki Kaurismäki’s classic films, Le Havre, La vie de Boheme, I Hired a Contract Killer and Man Without a Past are shown. The film week will also show Little Wing by Selma Vihunen, The Happiest Day in the Life of Olli Mäki by Juho Kuosmanen, The Fencer by Klaus Härö, East of Sweden by Simo Halinen and Time Out by Matti Kinnunen.

The short films shown are Askan by Ville Tanttu, Death of an Insect by Hannes Vartiainen and Pekka Veikkolainen, Fantasia by Teemu Nikki, The Ceiling by Teppo Airaksinen¸ Fingerling by Reetta Aalto, Super Comfort by Kirsikka Saari and The Tiger by Mikko Myllylahti.

Norvanto claims that Iranians are quite used to the high quality of films. The film industry of Iran is huge, and Iranian films have won hundreds of awards at international festivals.

“Emblematic for Iranian cinema are questions of morale, ethical dilemmas, family drama and inner conflicts. However, the melancholic music and overall artistic level in Finnish films shown at the EU film week made a lasting impression on Iranians,” said Norvanto.

A breath of something different

Around the world, Finnish culture is known for its high-quality education system and advanced technology. Norvanto says that Iranians think the same, but he also wishes that Finland would be known for some different reasons as well.

– Finland is seen very positively in Iran, but also quite narrowly. Given the situation we would like to tell the story of a country, whose achievements are based on equality and a functional democracy. Luckily, ordinary Iranians are interested in different cultures and people – I think that they would like to see how people in Finland live and think. Through cinema I believe this is possible”.